Aram and his Robot trade with an Investor’s real account in late July — the first half of August 2018.

As this Statement shows, the Investor deposited 100,000 US dollars on the trading account managed by Aram on July 24, 2018, after which Aram, along with his advertised Robot, lost one eighth of the deposit on the first day. 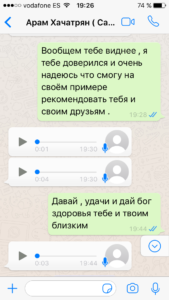 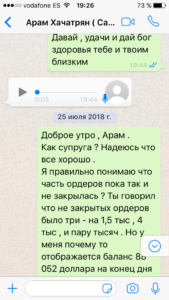 In the presented screenshots, one can see the Investor’s attitude towards his deposit and his faith in Aram’s sincerity and honesty. Aram’s reaction to the incident is obvious and expected.

In the days following this situation, Aram tried to recover the loss of the first day. Concurrently, Aram constantly talks about the need to increase the deposit.

Aram also regularly talks about how he likes the Investor’s faith in the Robot.

Warranties from Aram are confirmed in an audio message.

Trading on August 13, 2018 — the Robot actively opens and closes one lot at a time, as soon as a small jump occurs, the Robot cannot close and begins to average — frantically buying lots in opposition to the market  — and it does not help. As a result, the day closes at minus thirty-odd thousand (minus one third of the deposit). The next day, August 14, the market wins back a little the previous day’s fall and there is plus three and a half thousand in the Statement (trading is not conducted — profit is only due to the fluctuation of the futures price), and, finally, August 15.

That is, only two days later, Aram manually closes the positions opened by the Robot, commenting on this with the words:

If it wasn’t closed manually, then “the whole deposit would have burned to the cent”, and that this is a terrible force majeure (although a drop of one and a half percentage points can hardly be attributed to force majeure and such fluctuations often occur on the market) — totally for two days there is minus two thirds of the deposit and minus 67,000 US dollars of real Investor’s money.

Aram trades on the same real investor account in September 2018 without the Robot’s help.

As the Statement shows, Aram opened positions on September 19 and 20 with a mandatory closing until September 21, although they were available with closing at the end of December 2018. This mistake led to the Investor losing another $ 1,770 from his deposit. A similar mistake was a month before, but since it is the Investor’s deposit, not personal, Aram did not consider it necessary to take into account his recent negative experience. Aram’s comments on this fact are very eloquent — was tired, did not get enough sleep and did not pay attention to. And yes, how can he get enough sleep, if, judging by the photo, a normal day from the very morning is far from the morning exercises.

The Robot is trying to trade with an increased deposit amount.

This is the usual three days of the Robot’s operation on a real account.

Only by abandoning the Robot and starting to trade from his account manually, the Investor managed to save and increase his deposit a little. But since during manual trading, Aram’s commission decreased a lot, he began to close orders opened manually by the Investor without permission, after which the Investor decided to disable Aram’s access to his account (as it turned out later, according to AMP rules, Aram initially should not have such an access).

In this audio message, he says the Robot isn’t «Thefinalized VIP closed-loop product», how he promotes it everywhere, but is just an adviser and that the Investor himself trades successfully. That is, when and how much to close — minus 50 or minus 150 thousand — the choice belongs only to the Investor, since the Aram Robot provides enough time for this during sleepless nights of observing a rapidly melting deposit as a result of the Aram Khachatryan’s Colibri Robot-adviser operation.

As you can see in all reports, at the very end there is a calculation of commissions, which consists of exchange fees, Clearing fees from the broker and fees that are higher than those of the exchange and the broker company — AMP, which go to Aram personally from each open lot from the Investor’s account. The truth that this commission will also fall on the investor’s shoulders, and it is not mentioned anywhere in the Agreement with Aram and, moreover, in the audio message below

Aram claims that he has not received any commissions all this time. The fact of receiving these commissions by Aram perfectly explains why he needs the Robot in any state

can open and closed as many positions as possible and the fact that he appointed this commission more than the exchange and more than the broker should hardly surprise in the light of the information presented above.

Based on the results of communication and working with the Robot, the Investor wrote to Aram

And no reply as expected.